Carl Harvey’s career in music spans over four decades, to the mid-1970s when he recorded with reggae immortals such as Jackie Mittoo, King Tubby and Prince Jammy, a decade which for Harvey culminated with Willi Williams’ international hit record Messenger Man and his own first solo album Ecstasy of Mankind, which since its first legitimate release on Makasound in 2005 has become a much sought-after collector’s item. Also during that time, Harvey joined Crack of Dawn, Canada’s seminal black funk band that has recently reunited for several special concerts. In 1980, Harvey joined the literal originators of the word reggaeToots & The Maytals. 33 years later, the Maytals remain one of the top touring reggae bands in the world. In just over half a century since the great Toots Hibbert founded the Maytals, they have released more than 30 albums and compilations; Harvey appears on more than 15 of these records including 2004’s Best Reggae Album Grammy Award-winning True Love. Toots & The Maytals have performed with the some of the world’s most popular artists including the Rolling Stones, Dave Matthews and Sheryl Crow; and headlined stages at major eclectic, jazz and reggae festivals worldwide such as Glastonbury,Bonnaroo, Montreal Jazz Festival, Reggae on the River, Fuji Rock, Summerjam(Cologne, Germany) as well as hundreds of others along with the global A-list of clubs & theatres. Harvey’s 2005 solo album The Times also received wide-ranging critical acclaim.Type your paragraph here. 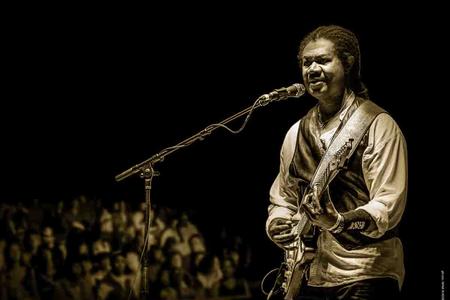 Many people who truly know and appreciate the history of the music consider Carl Harvey to be one of the top half-dozen or so reggae guitarists of all-time. However, that’s really only scratching the surface. Take the jazz and blues nuance of Ernest Ranglin and visceral rock ferocity of Peter Tosh, two of the greatest guitarists from Harvey’s native Jamaica. Add the sheer sonic brilliance of Jimi Hendrix and Carlos Santana, the blues-rock authenticity of Eric Clapton, and the hardcore funky groove of Eddie Hazel and Vernon Reid. For good measure, include the ear for soundscapes and the overall creative vision of a master producer and engineer. Now, you have a more complete picture of Carl Harvey as an artist. He’s a familiar face to millions of people, yet only truly known by those who know. Until now.